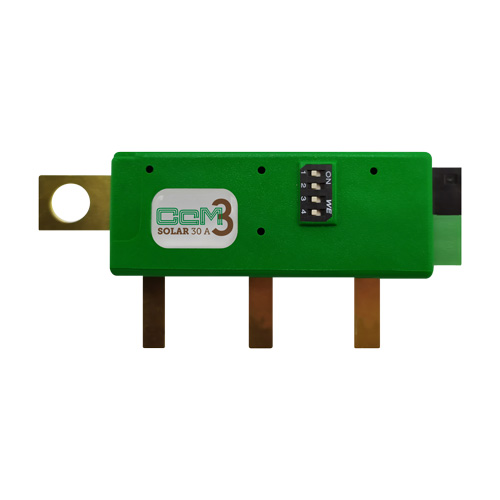 The CcM3-Solar 30A is designed to measure current in photovoltaics strings to be placed in photovoltaic trackers and string boxes into a solar installation.

This device is naturally placed on the fuse bases and measure the string currents for 1,000 and/or 1,500 V installations.

If the device is installed in the 1st level combiner box for trackers solar systems, it communicates with the solar tracker controller to obtain individual monitoring of the solar strings and improve the solar tracker
production.

If the device is installed in the second level combiner box (String Combiner Box) you can measure currents up to 30 A* for each of its 3 inputs (combs) up to a maximum of 90 A per device from several pre-busbar series.

The solar “SCADA” or Control Center will obtain the values ​​through the master tracking controller or directly from the string box (combiner boxes) through the communication buses, depending on their location.

This equipment of the CcM solar family has a “retrofit” design in order not to have to modify the existing combiner box (String boxes), being very easy to install from the beginning in new panels or to add later on in pre-installed combiner box and without the need for any major changes, since it does not take up much space.

It measures direct current with great precision and its most common use is in the series combined box located in the 3-series solar tracker, or in second-level photovoltaic string boxes where the current of series already pre-busted converge in parallel.

The main advantage of using this device in the combiner box of the solar tracker is that it saves communications wiring and power in the second level boxes (combiner boxes). It also allows individual monitoring of each series as well as improving the production or calculation of follow-up in line with the solar tracker's master.

The main advantage of using this device in the boxes of the second level series (combiner boxes) is that you can join up to 50 A of current (5 strings) per input and have a very precise measurement in a second or third level combiner boxes, saving a large number of measuring equipment for previous solar string combiner boxes.

It can measure up to 90 A per device or the current of 3 busbar series.